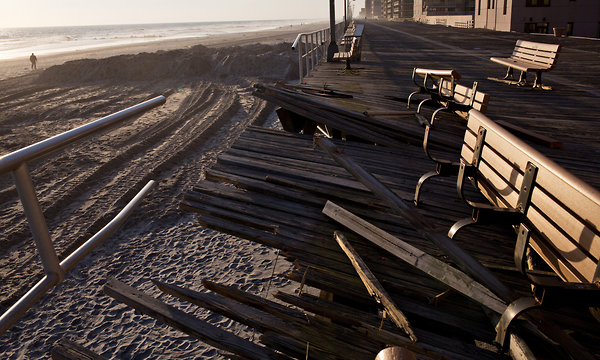 (Excerpt)
So, six years ago, after the Army Corps of Engineers proposed to erect dunes and elevate beaches along more than six miles of coast to protect this barrier island, the Long Beach City Council voted 5 to 0 against paying its $7 million initial share and taking part.

Many of Long Beach’s 33,000 residents would come to regret it.

The smaller neighboring communities on the barrier island — Point Lookout, Lido Beach and Atlantic Beach — approved construction of 15-foot-high dunes as storm insurance. Those dunes did their job, sparing them catastrophic damage while Long Beach suffered at least $200 million in property and infrastructure losses, according to preliminary estimates.

Joe Vietri, director of coastal and storm risk management for the corps, toured the damaged coastlines after the 12-to-14-foot storm surge of Hurricane Sandy and came to an inescapable conclusion. “The difference was dramatic for areas with vital and healthy dune systems, which did better than those that did not,” he said in a telephone interview. “You can see the evidence on Point Lookout and Lido Beach, which did much better than Long Beach.”