The U.S. Senate voted Thursday to delay planned increases in flood insurance rates that many homeowners along the coasts of New Jersey and New York have said would price them out of their homes.
The Homeowner Flood Insurance Affordability Act passed the Senate 67 to 32, but it faces substantial opposition from the the House of Representatives and the White House.

The rate increases were part of reforms passed in 2012 when Congress worried about the financial stability of the National Flood Insurance Program, a system that is run through the Federal Emergency Management Agency and insures 5.5 million homeowners. FEMA says roughly 20 percent of policyholders pay below-market rates that do not reflect their true risk of flooding. They either have seen their premiums go up already or will face hikes soon unless the law is rolled back.

The Senate bill would:


Menendez's bill would not affect second homes or properties that have seen repetitive flooding. Rates for those policies would go up according to the 2012 legislation.

Everything we always wanted to know? Rat Information Portal Map Re veals How Many Rats Live in Your Nabe | The New York Observer And ...
0 comments

Cuomo and De Blasio: No blinking in the Pre-K arena 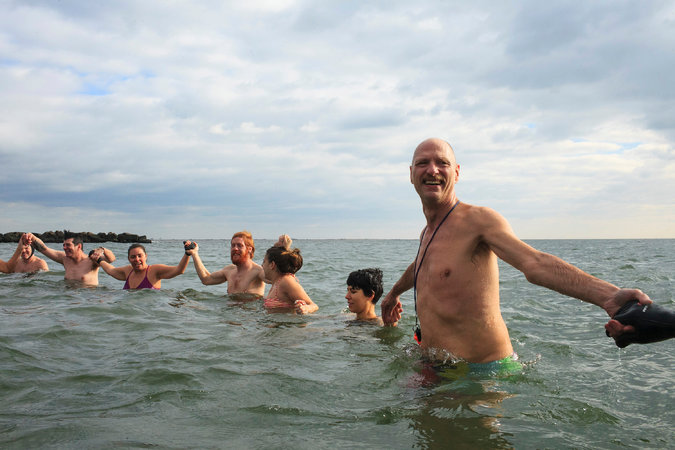 (Excerpt)
"After three decades, Dennis Thomas’s winter Sundays are no longer shocking. They are just cold. From November to April, Mr. Thomas, 59, charges into the Atlantic Ocean, along with other members of the Coney Island Polar Bear Club; he has been the group’s president for five years. This year, the club’s premier event on New Year’s Day drew 2,000 swimmers and 6,000 spectators and raised $65,000 for children with serious illnesses. On any given Sunday, 80 to 100 members show up at the New York Aquarium for the frosty frolic — neoprene bootees allowed. The lowest water temperature recorded for a swim was 32 degrees one February. Mr. Thomas, the director of global branding for the technology company SAP, lives alone in Greenpoint, Brooklyn. He suspects that his 25-year-old daughter thinks he is crazy."

Manhattan and Brooklyn are much poorer than you think. So how can anyone afford to live there?

New York City census data: Manhattan and Brooklyn are much poorer than you think.

(Excerpt)
Measured by median income, Manhattan and (especially) Brooklyn are much poorer than you think. Manhattan’s median annual household income is $66,739, while Brooklyn’s is a mere $44,850. Its less fashionable neighbor, Queens, outearns Brooklyn at $54,373 per year. New York City’s most suburban borough, Staten Island, is also its richest, with a median household income of $70,295, while the suburban counties surrounding New York are all richer than any of the boroughs.

Meanwhile, the cost of living is astronomical in Manhattan, where the median monthly rent is $3,100; it’s $2,800 in the gentrifying northwestern quadrant of Brooklyn. So how can so many relatively low-income people still live in these areas?

The answer has to do with the peculiarities of New York’s housing stock, demographics, and history. Here are the main seven factors.
0 comments

(Excerpt)
Coney Island is set for a shark attack.
After years of planning, New York Aquarium is finally set to break ground on a jaw-dropping new shark exhibit Friday.
The massive 57,000-square-foot "Ocean Wonders: Sharks!" exhibit will feature a coral reef tunnel that will give guests a 360-degree-view of the new plethora of ocean life when it officially opens to the public in 2016.

“You will be surrounded on all sides by not only sharks, but by schools of bright colored bony fish and the sort of beauty of the tropics that we all associate with diving,” said Jon Forrest Dohlin, aquarium director and vice president of the Wildlife Conservation Society, which runs the aquarium.
The $157-million exhibit will feature more than 100 species of marine animals, both local and from around the world, including sharks, rays, sea turtles, thousands of schooling fish and other crustaceans.
More than 45 sharks, including sand tigers, nurse sharks, blackttip reef sharks and bamboo sharks will swim around inside the three main 500,000-gallon tanks.
“It’s going to be a tremendous expansion of our collection,” said Dohlin. "I think people will be amazed, exhilarated and inspired.”
The three-story facility will also boast a roof-deck overlooking the ocean, classroom space and a cafe.
Officials were supposed to break ground on the exhibit a year ago, but Hurricane Sandy devastated the aging aquarium and delayed the project, which has been in the works for several years

If you haven’t already, it’s time to dig those sleds out! NYC Parks has announced that Saturday, January 4, is an official Snow Day.

Kids (and kids at heart) are invited out to Prospect Park for “supervised safe sledding (there will be sleds available at each snow day site), snowman building contests, best snow angel contests, friendly snowball fights, music, and complimentary hot chocolate.”

The fun takes place from 11am to 3pm near the Tennis House (enter at 9th Street and head toward the Long Meadow). For more information, including other Snow Day locations around the city, visit the NYC Parks website.
0 comments

Around 2,500 intrepid swimmers took a dip in the 41-degree ocean at Coney Island Wednesday as part of the annual Polar Bear Club dip