Rare ticket given to couple riding bikes on the #coneyisland #boardwalk

Not surprising that the boardwalk would be crowded on this spectacular day.  But with the 2013 Walk to End Alzheimer's starting at 9am  and a large turnout in the afternoon by Hasidim and their families to celebrate the holiday of Sukkot it was more festive with large numbers of families and young boys and girls in and out of hundreds of strollers.  It is always difficult to navigate by bike around the masses on the boardwalk and the prudent and considerate thing to do is get off and walk your bike for everyone's safety. But today was especially busy including a presence of heavy security.. Earlier I had just observed a woman in a light blue top speeding and swerving through the densely packed groups and wondered if she had a clue how reckless she was.  As I turned to go back I observed this young couple being stopped by a police officer and given a ticket for riding their bike on the boardwalk. They obviously were unaware of the rule which forbids any bike riding except between the hours of 5am-10am. .
The young woman explained that this was her first visit to Coney Island and she saw no signs or warning that biking was not permitted.  She is partly correct.  The signs are stenciled at the bottom of the ramps that enter the boardwalk at various locations along the route.. But they are not very visible and it is easy to miss the faded decals as one rides up the ramp.
I tried to warn other riders about the police ticketing and most got off and walked or turned back.  One elderly woman  told me to "F*** Off! I hope she got caught.

The parks department needs to make the signs more visible as one enters onto the boardwalk.  The parks department has a love affair with these decals along Ocean Parkway as well. The older ones are barely readable and the newer ones don't seem to do the job although the graphics are nice.  Brightly colored signs that are at eye level must be installed.
Soon afterwards I noticed the woman in the blue top speed again returning from the Coney Island amusement area.  I don't think she got a ticket.  Felt bad for the two that did.  It was the first time ever I saw a ticket being written for riding on the Boardwalk in the twenty years I have been going there.. 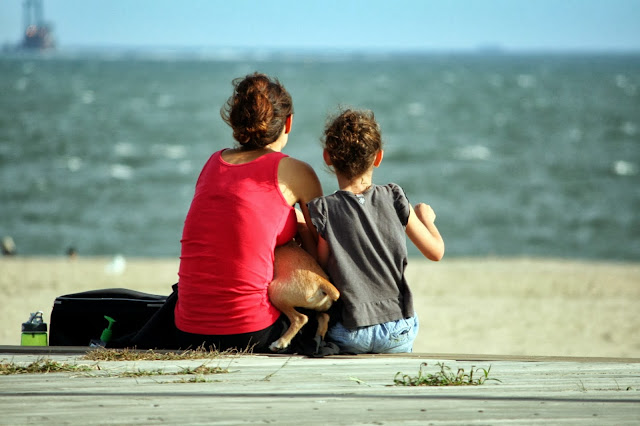 Today was pretty windy at the beach.  Blowing sand kept many people on the boardwalk and away from the shoreline.  As I was leaving I took this shot of this family sitting just off the steps that lead onto the beach. Didn't realize their pet dog was part of this crew until checked out the pic later.  You can tell how windy it was by the white caps on the ocean.  Long lens gave me a better result than I expected.  Brought back memories of our visits to the beach with the kids as they grew up only a few steps from the sand and surf.
0 comments 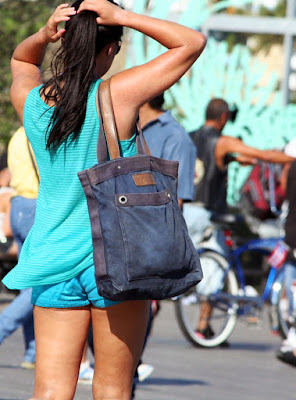 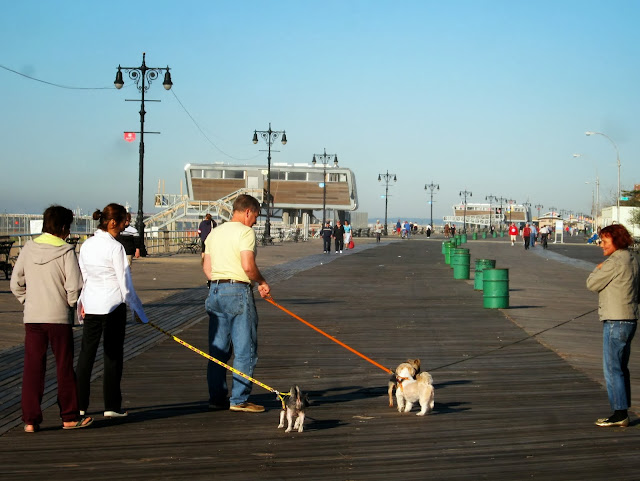 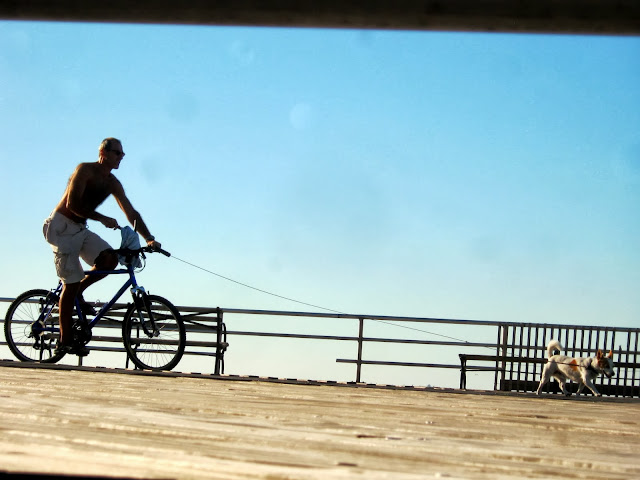 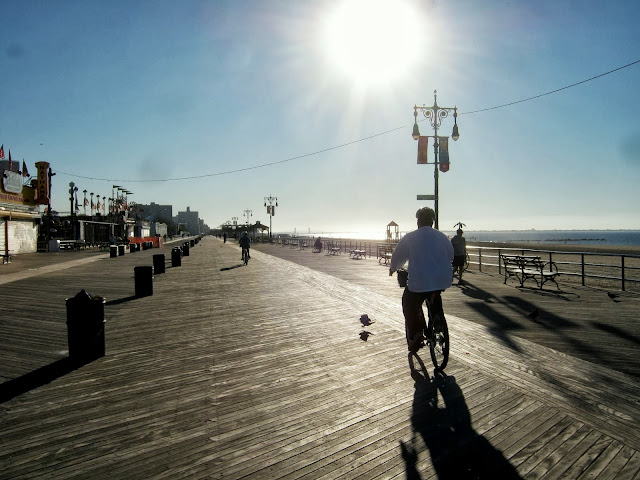 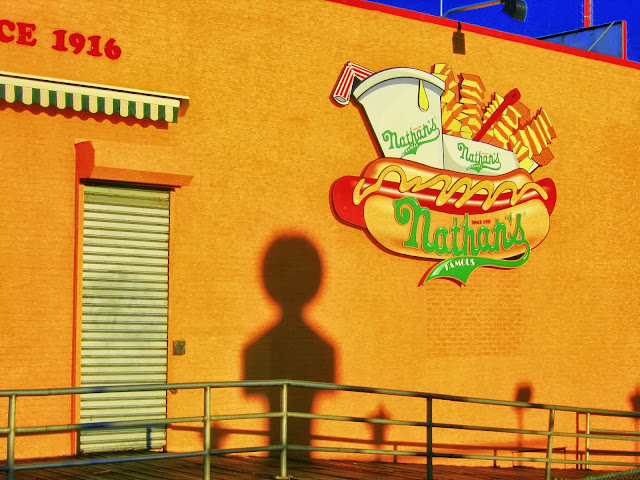 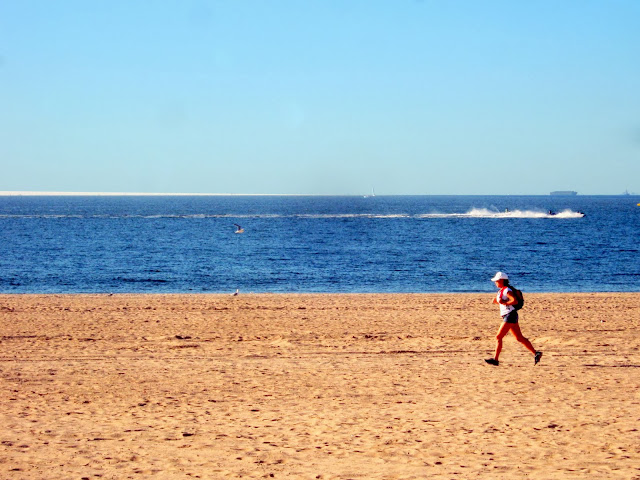 (Excerpt)
In the ensuing decades, population loss, television, cars and air conditioning undercut Coney Island’s appeal. New York’s urban planning czar, Robert Moses, hated its tawdry arcades and thrill rides. He transformed the eastern end of the amusement district into a home for the relocated New York Aquarium. The housing projects with which he rebuilt Coney Island became some of the city’s most depressed and dangerous.

As the city grew rapidly in the ’90s, Mayor Rudolph Giuliani set his sights on Coney Island. Like Moses before him, he bulldozed a roller coaster to build a recreational facility, this time a minor league ballpark for the Brooklyn Cyclones. The Bloomberg administration eyed the island as a potential site for the 2012 Olympics, and in 2003, commissioned the Coney Island Development Corporation (CIDC) to examine the possibility of revising the restrictive C7 zoning that since 1961 had sheltered carnies and coasters (and a few vacant lots, as well) from market forces.

But a Brooklyn developer named Joe Sitt stole the limelight from CIDC, announcing a $2 billion plan in September 2005 that made the Las Vegas Strip look dull. Sitt had shrewdly purchased over a dozen acres of the old amusement park in anticipation of a rezoning gold rush, and hoped to bring in marquee clients like Dave and Buster’s, Ripley’s Believe it or Not, and the Hard Rock Café.
0 comments

(Excerpt)
The colorful and eerie graffiti mural lining the wall opposite the Stillwell Avenue subway station in Coney Island was singled out as some of the city’s most interesting graffiti. The New York Times highlighted the piece, noting that the creators are identical twin Brazilian brothers known as “os gemêos” (twins in Portuguese).
The brothers, identified as Otavio and Gustavo Pandolfo on their website, are gaining worldwide fame for their psychedelic and surrealistic creations. The Times noted that the piece was created in 2005 for the Dreamland Artist Club, a special project put together by Creative Time, a public art group.
0 comments